Well, it’s been a busy month, as you can tell by the tardiness of this post! In fact I have been writing – just not for myself… But more on that later.

This month, I’m back to sunny Brisbane, probably because the cold has now thoroughly set in here in NSW and with winter being my least favourite time of year (save for the novelty of dressing in lovely big coats), I feel an innate need to plant my mind somewhere characteristically warm and bright.

Indeed, this is another contemporary Queenslander; a space which bounces between inside and out, constantly eroding the edge between both, so that at any moment the architecture might slip into the guise of landscape and vice versa. This is such a clever approach to contemporary living for many reasons, but the most pragmattic (and as it happens, environmentally sustainable) is that it genuinely negates the relevance of sprawling square meterage, allowing for a smaller overall footprint, therefore inciting lower quantities of construction materials and a lessened overall environmental impact. It also leaves more room for grass, trees, and fresh air – what’s not to like?!

To be quite honest, it was a little tricky to pick which of SLa’s houses to feature, partly because all of them are quite lovely, and partly because none of them are overly showy or attention-seeking. Instead, each building focuses on developing simple architectural forms sculpted by the patterns of life and their location on earth. Well, that all sounds a bit more ephemeral than I anticipated, but what I mean to say is that these aren’t spaces made for distant admiration, but for everyday living, and in this way the most beautiful spaces are often very subtle. These are the spaces that most deftly react to, and articulate the best means of inhabiting a site according to whoever lives there.

SLa’s street frontages are often quite unassuming, the intrigue of the architecture not visible until within the primary living areas of the house, which are usually sited to the rear, and the more private part of the block. There are hints, however, at the soon to be revealed complexities of the house, here indicated particularly by the window hoods, and a contemporary approach to materials (exposed concrete block, black and white, weatherboard, and vertical beading, alongside timber doors and windows).

The Terraced House provides for what must be some of the most livable spaces a house might wish to encompass. The primary living area at the back of the house is long and narrow, capturing maximum amounts of north facing sun as it passes across the length of the block, from back to front. This narrow living area sits alongside a long, sunny grassed area, expanding as it reaches past the end of the house, allowing room for a pool and added play areas. The living area opens itself to the garden in a way that encourages genuine inside-out, and outside-in living. Lines between the two blur, therefore providing for ample, sunny spaces that easily accommodate for the needs of the inhabitants.

As for the rest, I’ll let the pictures do the talking…

All photography by Scott Burrows 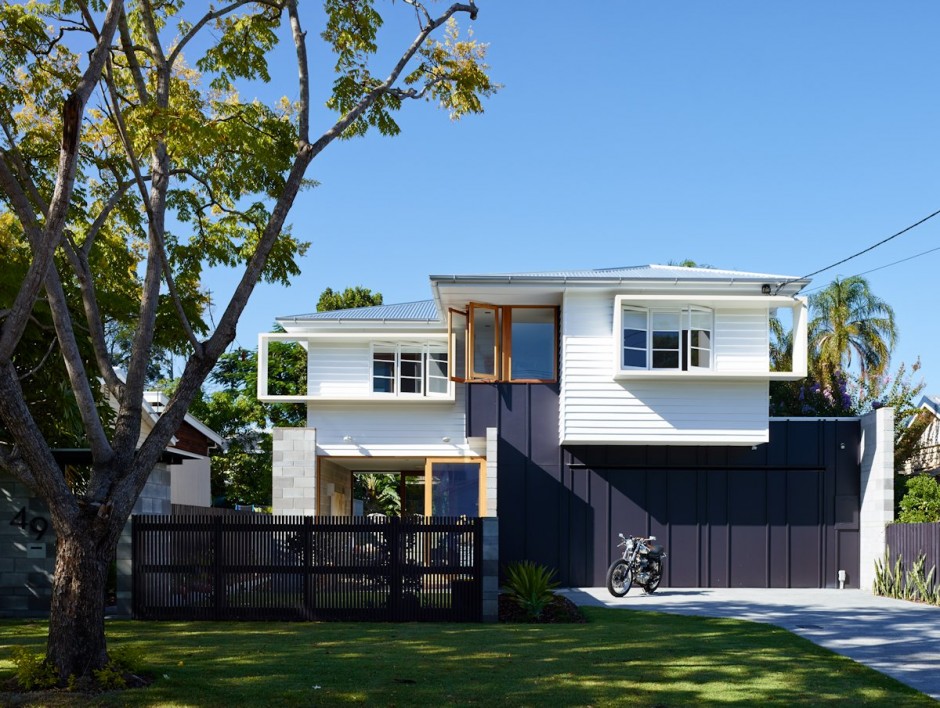 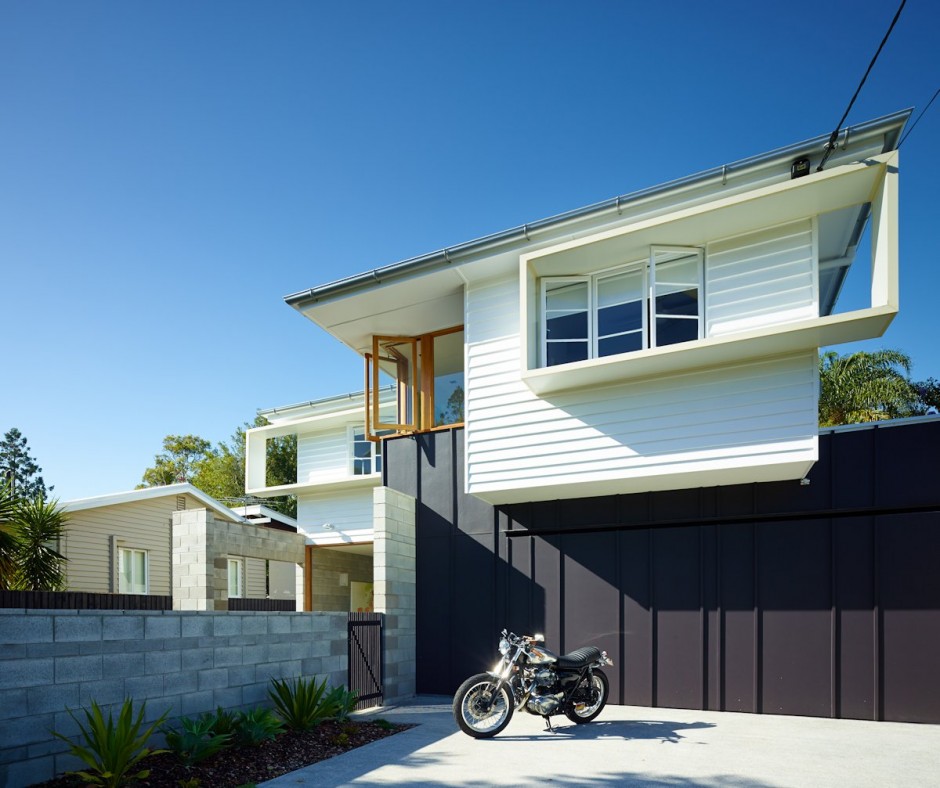 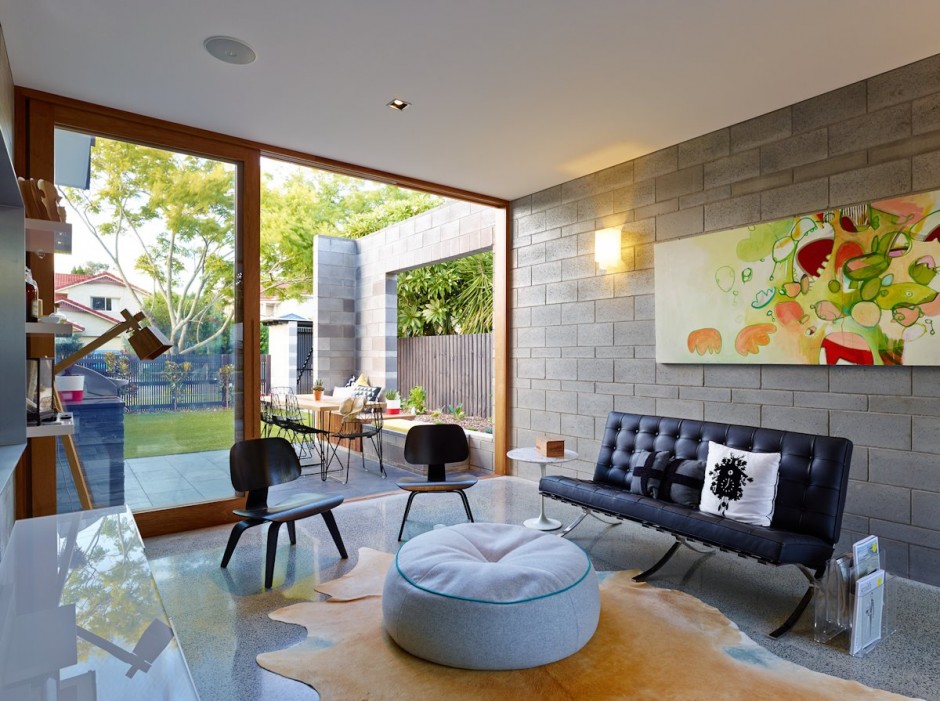 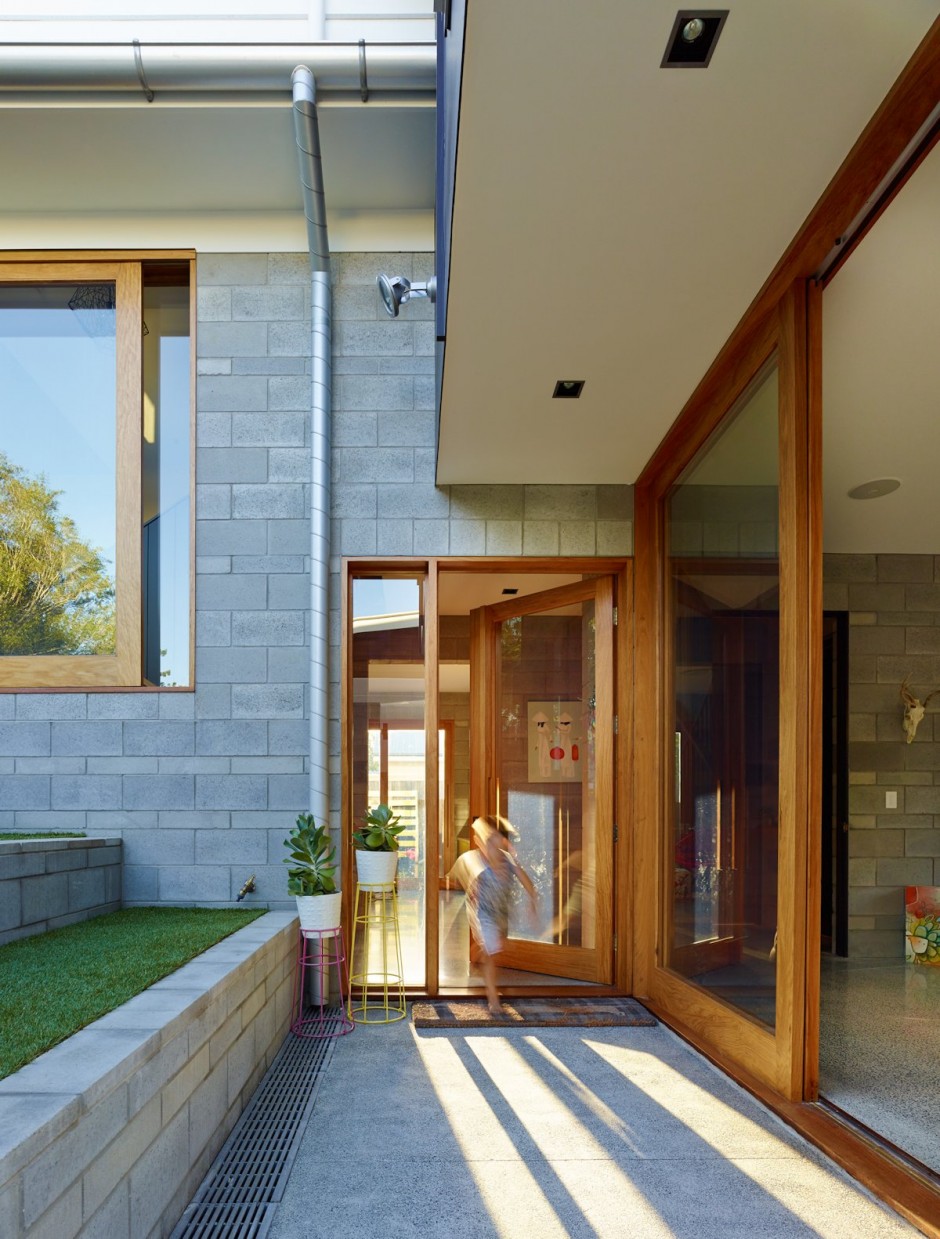 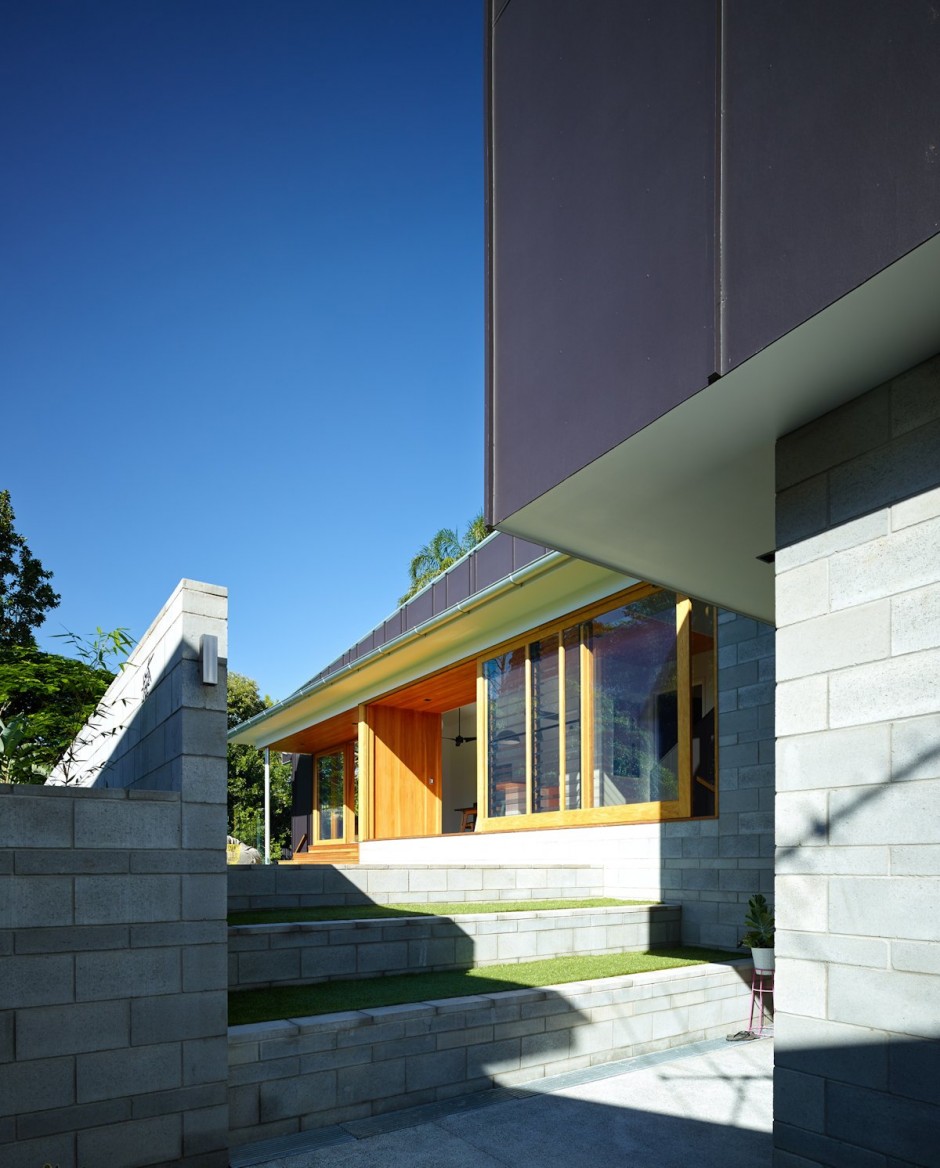 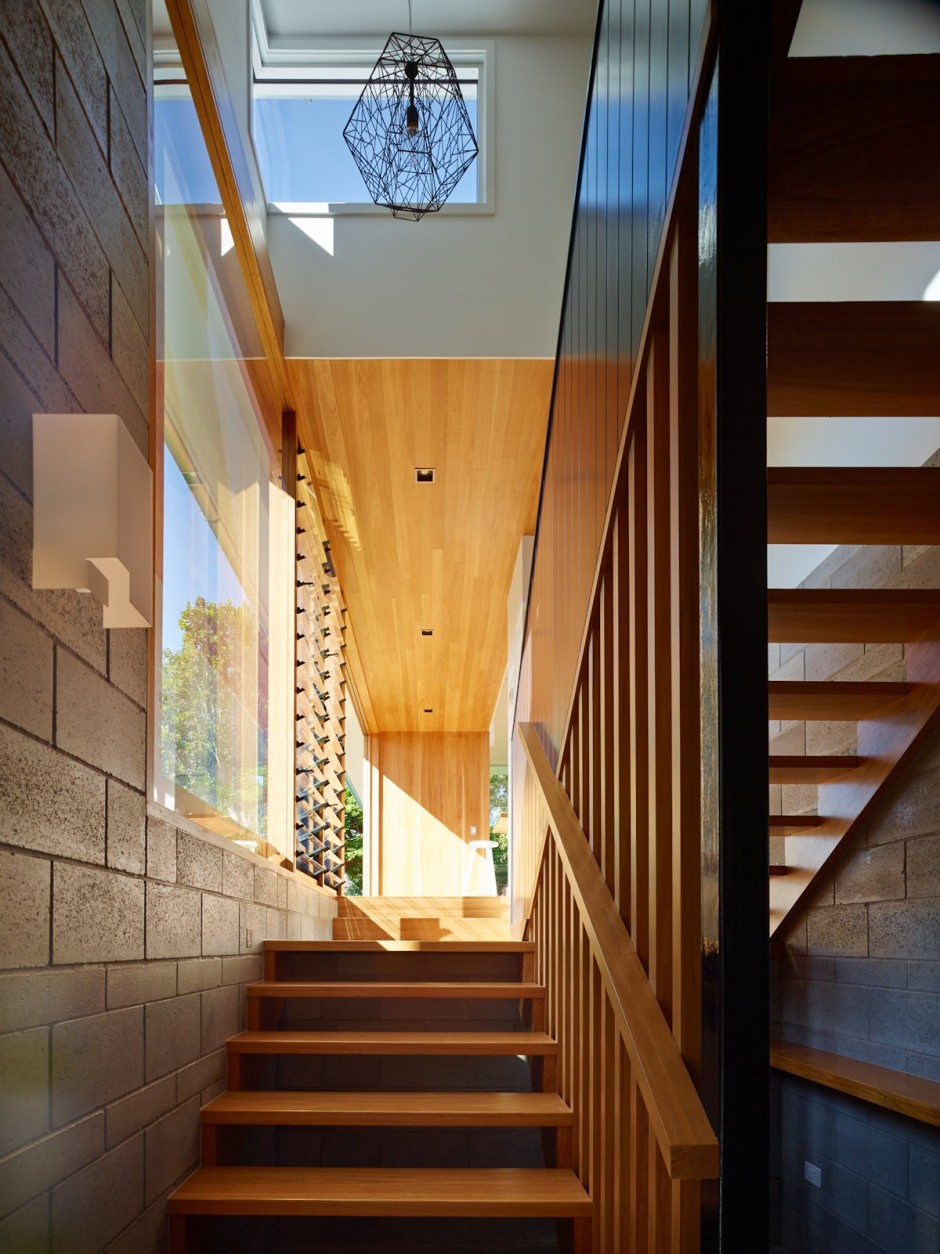 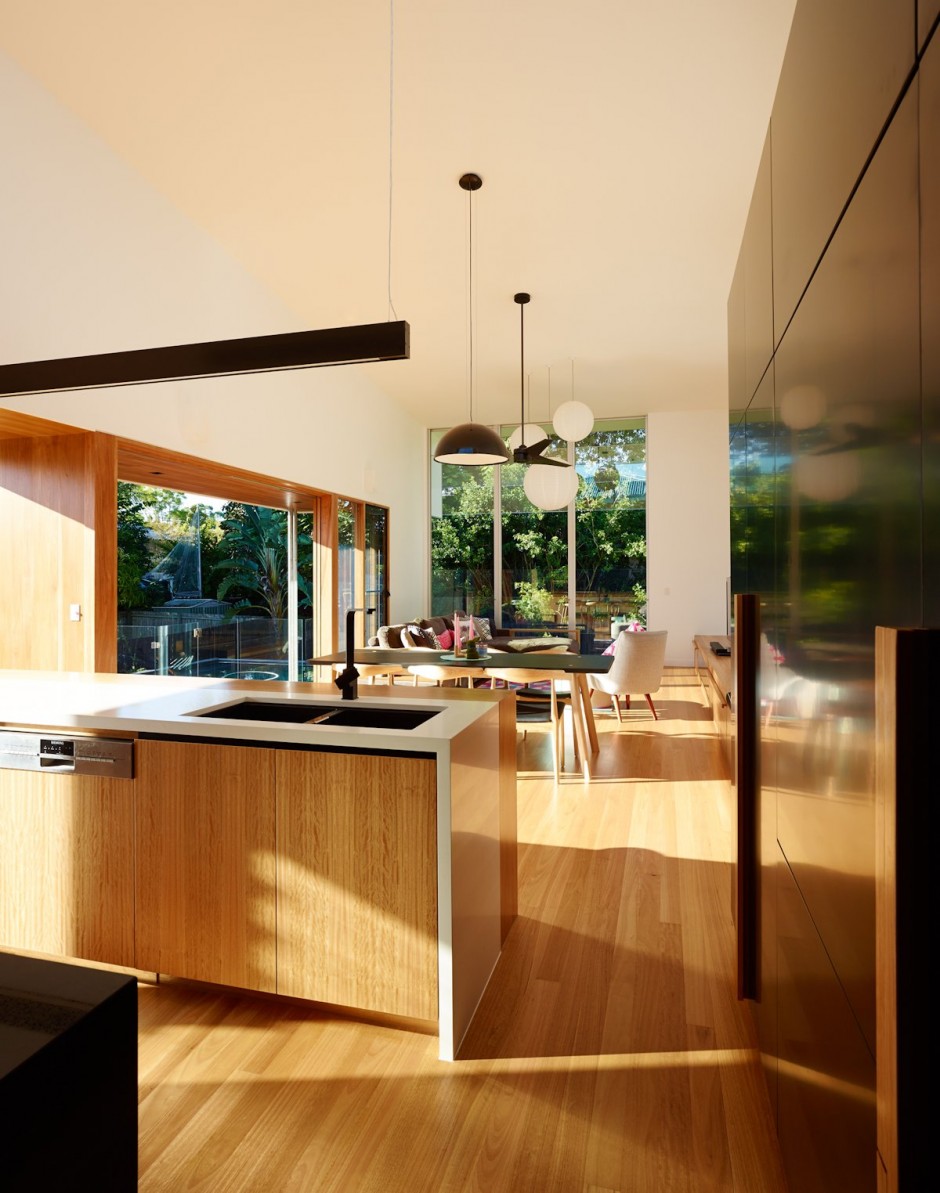 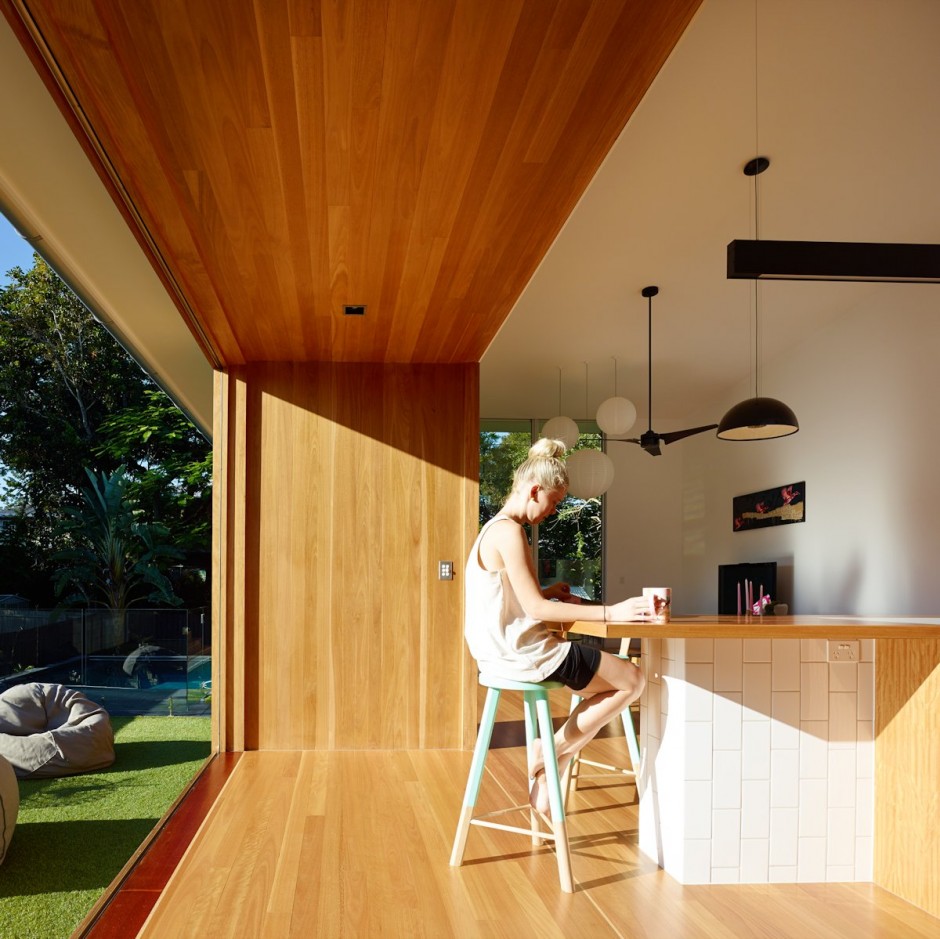 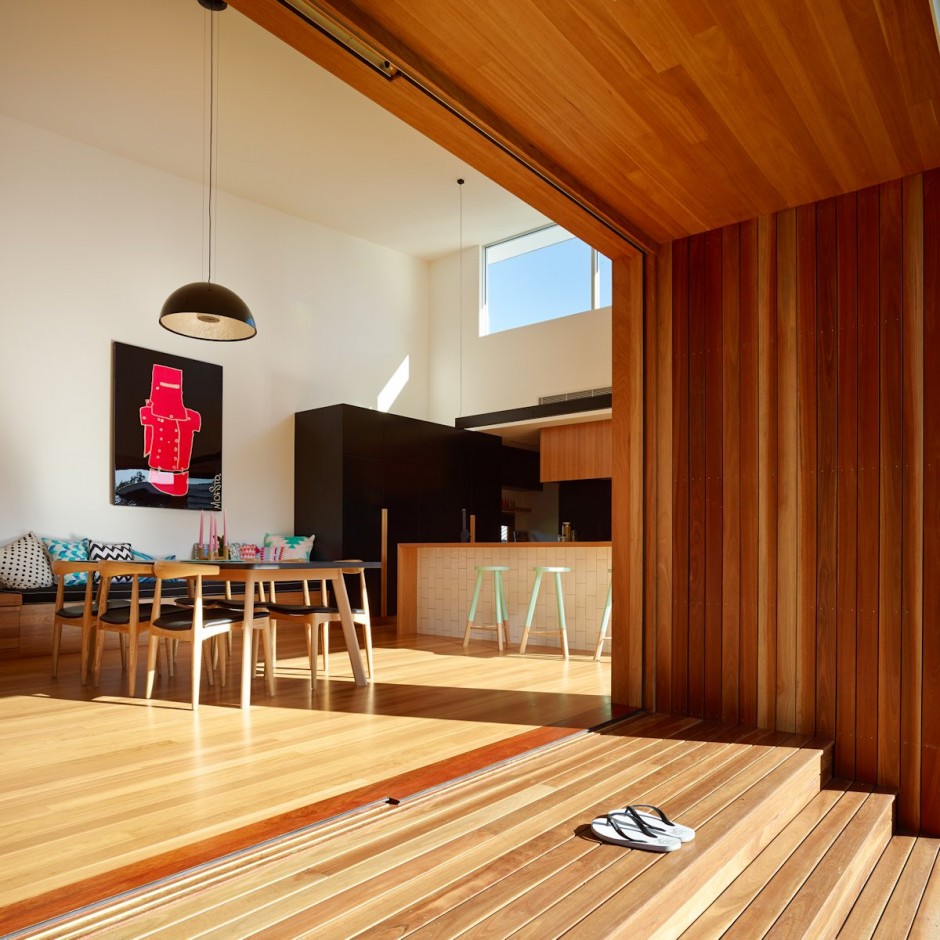 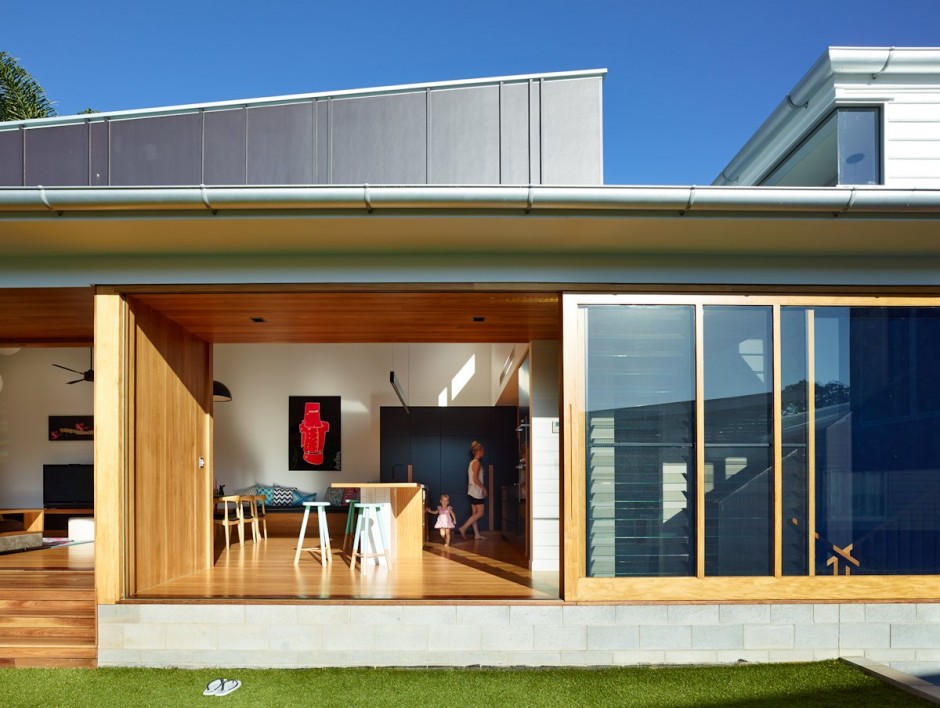 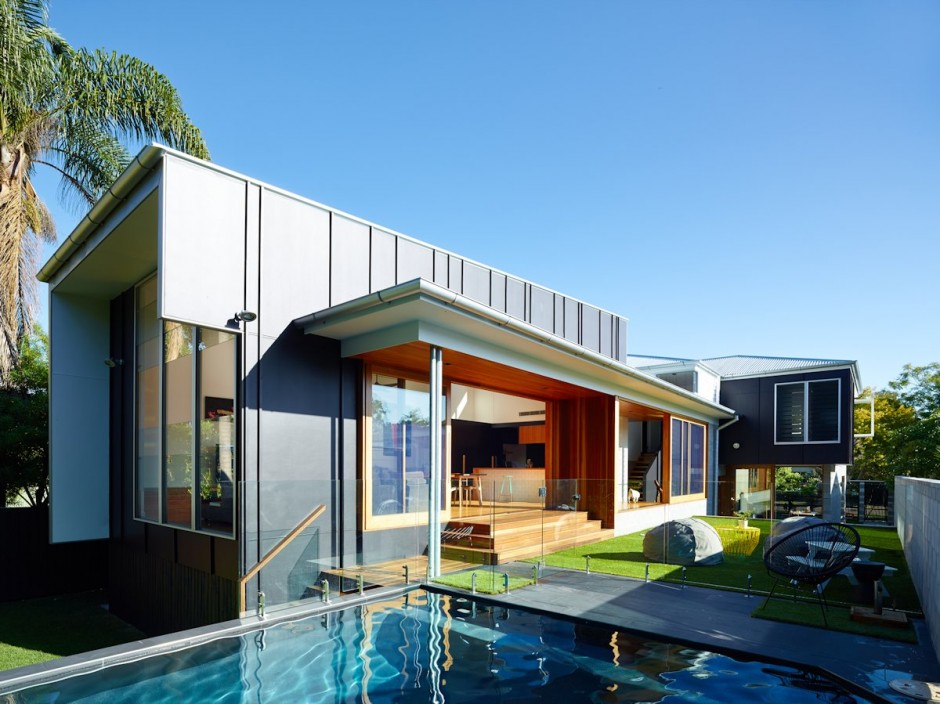 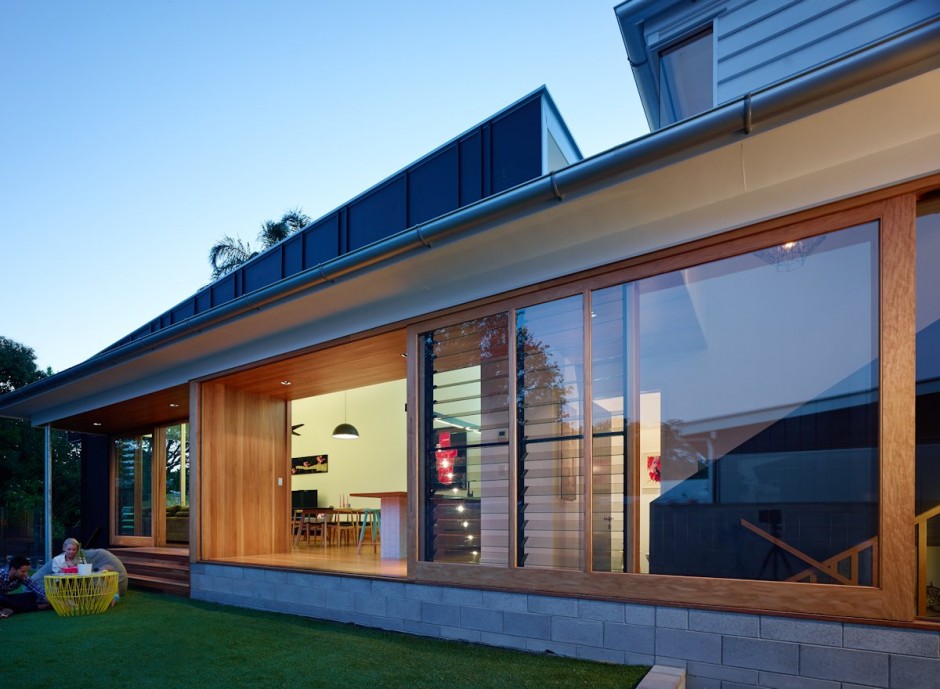 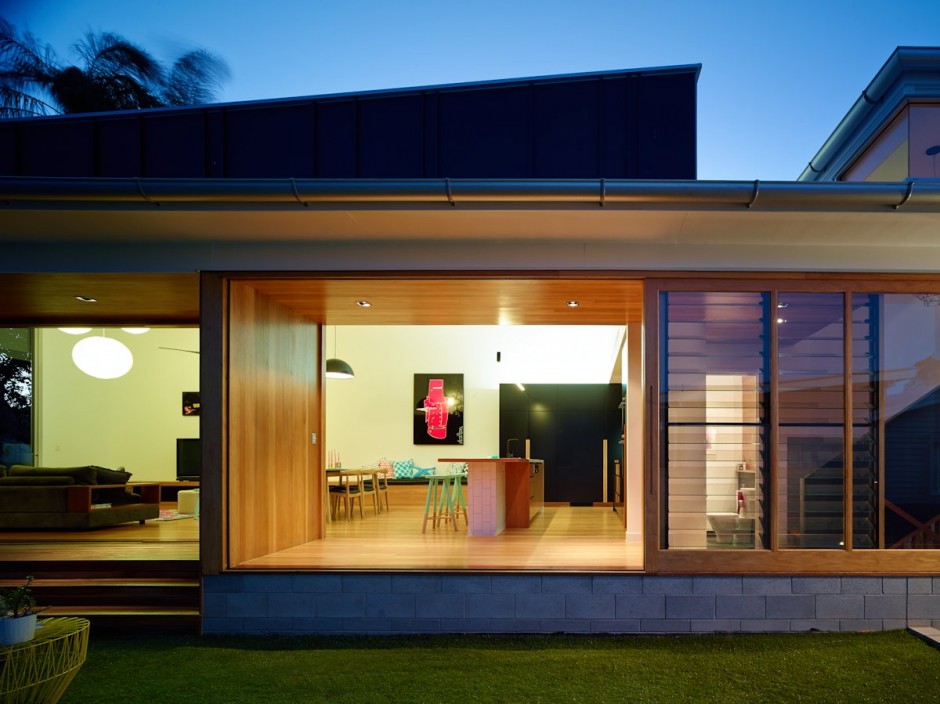 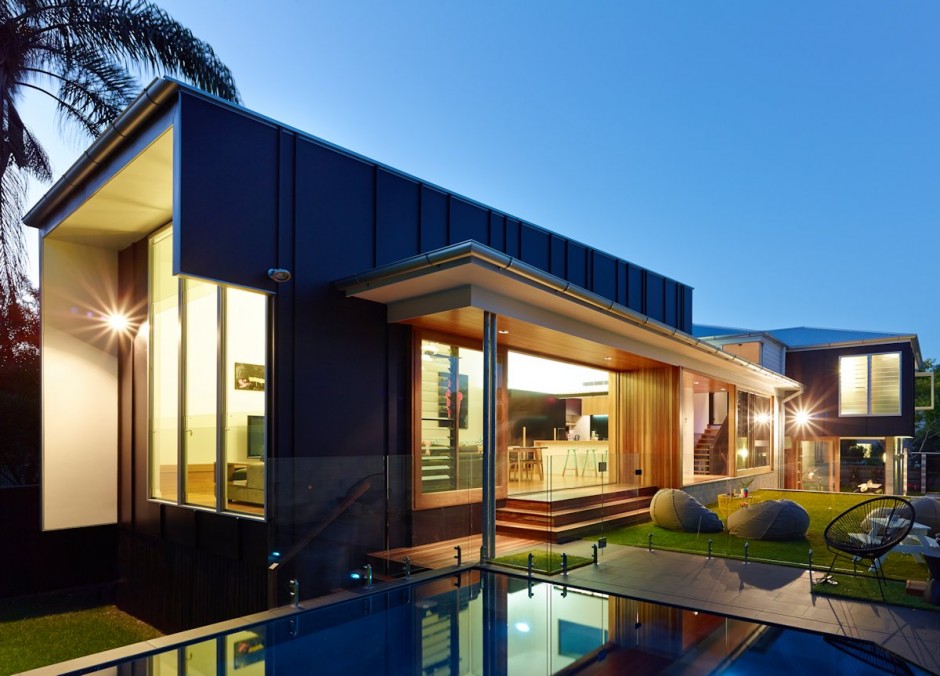 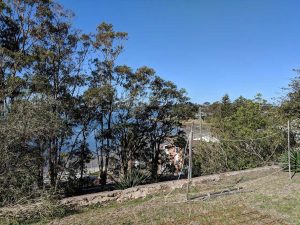 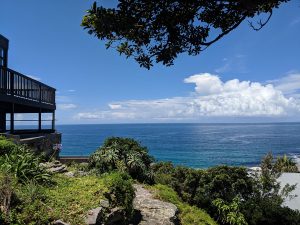